Mating ewe lambs can increase the lifetime performance of the ewe and overall flock productivity. Ewe lambs should be at least 60% of their mature weight at first joining and 80% of mature weight at second joining (two-tooth). Ewe lambs should be run as a separate flock from the time they are joined with the ram until the following breeding season to allow for additional nutritional management (https://www.teagasc.ie/animals/sheep/breeding–genetics/ewe-lamb-replacements/).

Ewe lambs have a lower conception rate than mature ewes. Consequently there tends to be a greater proportion of ewe lambs barren at the end of the breeding season than mature lambs. The “ram effect” can be used to induce ewes and ewe lambs to start cycling provided they are sufficiently close to the time of onset of normal cyclicity thus increasing the proportion of ewe lambs joined been mated. For the “ram effect” to work the ewes should have not been in contact (sight or smell) with rams for the previous month.

In practice the ram effect can be deployed (http://sheepnet.network/node/85) to ensure that all ewes in the flock are at the stage of exhibiting overt oestrus during the first 17 days of the joining period. The “ram effect” schedule is summarised in Table 1. On day 1, a vasectomised ram, or a fertile ram fitted with an apron, is introduced to the flock. Fertile rams are introduced to the flock 14 days after the rams used to induce the ‘ram effect’ were first introduced to cover ewes with short cycles and ewes that were already cyclic at the time of ram introduction. Expected peak mating times are 4 and 9 days after fertile ram introduction.

Use of the “ram effect” will compact the lambing season with 62 and 84% lambing within 2 and 3 weeks, respectively. When using the “ram effect” to synchronise the mating season it is essential to have an adequate number of rams for mating (1 experienced ram per about 40 ewes) and to have adequate facilities (lambing pens – 1 per 5 to 6 ewes) and labour during the lambing season.

Effect of age at lambing on ewe growth

Provided ewe lambs which produced their first litter at 1 year of age receive an adequate plane of nutrition, there is no evidence of any negative consequences for their progress to achieving mature body weight.

The metabolizable energy (ME) requirement of ewes, regardless of age, increases rapidly during late pregnancy due to the rapidly growing foetuses and requirements for proper udder development (for colostrum production). However, ewe lambs also need to gain weight to enable them progress towards mature body size. Thus, relative to a mature ewe of similar weight, a ewe lamb requires an additional 2.5 megajoules (MJ) of ME (equivalent to 225 g of barley) daily during pregnancy to enable her to gain 50 g daily in live weight. Further information on nutrition during late pregnancy is available here: http://sheepnet.network/node/216

Lambing ewes at 1 year of age has no negative effect on litter size or the number of lambs reared per ewe joined when lambing at 2 years of age provided they are managed correctly. Lambs born to ewes which had previously produced a litter were 0.3 kg heavier at birth. Age at first lambing had no effect on the number of ewes that were available for joining at 31 months of age.

Number of lambs reared during a ewe’s lifetime is a key factor influencing profitability. Joining ewe lambs increases the number of litters, and thus lambs reared during their life time. At 4 years of age ewes joined to produce their first litter at one year of age reared an extra 1 lamb per ewe joined relative to those joined to produce their first litter at 2 years of age. 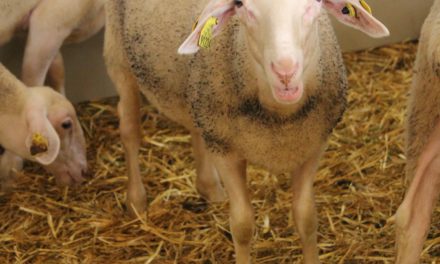 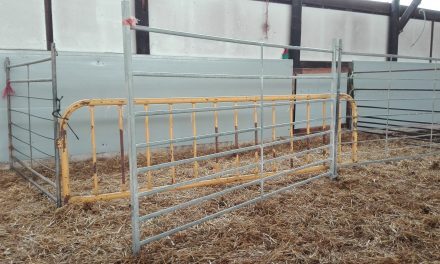 Barrier to restrict the access of the lambs to their mothers 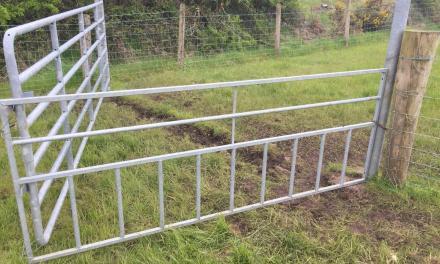